Greta Holmgren, often called Sago-Greta (Storyteller-Greta), was an author who also sometimes toured with lectures and music soirées. She created Barnens Paradis (the Children's Paradise), a play park for children at the Gothenburg Exhibition in 1923, and she edited the children’s page in the major Swedish daily newspaper Dagens Nyheter. In the 1960s she read stories on Swedish radio.

Greta Holmgren was born in 1870 in Lund when her parents were just travelling through. She was the oldest child of the author Ann Margret Holmgren, née Tersmeden, and Professor Fritiof Holmgren. Her father was an internationally known physiologist and Sweden’s first professor of that subject. Her mother was, amongst other things, the managing director of the Upsala Nya Tidning in 1897—1898, and very involved in women’s rights issues. Greta Holmgren grew up at Villa Åsen close to the Botanical Garden in Uppsala. Their home was for many years a gathering place for Uppsala’s academic radicals. Among others, Hjalmar Öhrvall and Knut Wicksell belonged to their social circle. The family’s economy became a worry when their mother’s inheritance, placed in works shares, stopped producing income. Villa Åsen was then opened for lodgers and became a much appreciated home for several generations of students.

Greta Holmgren had seven younger siblings, of whom four became well known: the members of parliament Israel Holmgren, physician and professor and Björn Frithiofsson Holmgren, a naval officer, as well as Torsten Holmgren, the pioneer of electricity, and Professor Gunnar Holmgren.

Their upbringing was free and unconventional for that time. Greta Holmgren was dressed in the same way as her brothers. Their father had gymnastic apparatus built on the estate so that the children could do physical exercises. The family was also very interested in music, languages and dancing. A young Swiss woman, called Bonne Marie, was employed as a nanny for the children and she became a popular member of the family. Greta Holmgren and her siblings produced theatre performances for guests and for the maids in their home. Their relatives were also very musical and Greta Holmgren often accompanied her mother to Stockholm for her singing lessons. Her mother had a lovely soprano voice and was known as the suffrage movement’s songbird. Greta Holmgren’s maternal grandfather was also musically interested and had a good voice.

During their early school years, the children received tuition in their home at Kungsgatan in Uppsala. In that house, also called The Palace, other children than the Holmgrens also participated in the lessons. Greta Holmgren was eventually sent to the Uppsala grammar school for girls (Alexandersonska flickskolan) in Trädgårdsgatan in Uppsala. It was an ordinary 8-year grammar school. Greta Holmgren had already developed an interest in writing, and she and three friends produced a magazine for their school class. She left school before taking her final examination there, to continue her studies at the Royal Academy of Music in Stockholm instead. She later studied music in Christiania (present-day Oslo) and Berlin. She also took up a position as a governess in Bois-Colombes outside Paris.

In 1895, Greta Holmgren married Johan Olof Lilliehök af Fårdala, bank director and general consul, with whom she had two daughters, Gerd and Birgitta. The couple settled down in Gothenburg. They were divorced in 1904. In 1912, Greta Holmgren remarried, this time Sixten Strömbom who was an art historian and museum curator. The family socialised with among others eminent artists like Carl Milles and Isaac Grünewald. They had homes in Gothenburg and Lidingö. They were divorced in 1923.

Greta Holmgren published folk tales and worked hard to get the saga accepted as a literary form. She was an excellent story-reader and toured with lectures and musical soirées. In 1913 she published a book about the author August Bondeson, Ur den blåmålade kistan. He collected and published folk songs and folk tales. Bondeson, who was a close friend of the family, came to mean a great deal for Greta Holmgren’s own storytelling. She described him as the dearest of all story uncles during her childhood and in Ur den blåmålade kistan she recounts recollections of Bondeson. In a review of the book in the literary magazine Ord och Bild in 1914, Ellen Key gave a portrait of Greta Holmgren as a very insightful and sensitive author:

“The hands that have touched – a dead person’s belongings – have in this case been very mild and gentle. But above all, Greta Strömbom-Holmgren has within herself a song and story disposition through which she has had the power to awaken to new life the memory she has cared for so faithfully.”

In 1923, Greta Holmgren created the children’s play park Barnens Paradis at the Gothenburg Exhibition. The play park was one of the most popular events of the Exhibition and contrary to the rest of the Exhibition, it made a profit. The project came into being at the end of the preparations, on the initiative of Greta Holmgren. Exhibition General Adelsohn was immediately entranced by the idea of creating a place and a “paradise” for children during the Exhibition. In Barnens Paradis, there were roundabouts and pony-riding and the children’s own parade of guards with soldiers in tall helmets that were the forerunners of the Göta Lejon wind band. In the Äppleboda Inn, hot chocolate was served with whipped cream and all the staff were children. There was a Gingerbread House and a fabulous swing in the shape of a gigantic old man with two galoshes in which children could be swung. There were also many other attractions and activities. Greta Holmgren describes her work on Barnens Paradis in the following way in an interview in the daily exhibition magazine, Dagens Program, on 27 June 1923:

“I am overjoyed”, says Sago-Greta. “I feel like a queen in a story, I have everything I could wish for and see continually happy and fortunate children around me in the most wonderful of all gardens. The whole of this summer is like a fairy tale for me and I am so happy to have had the opportunity of carrying into effect and creating this Children’s Paradise.”

Greta Holmgren published their own newspaper for children — Paradisposten — that appeared during the exhibition summer. The editor was Greta Holmgren’s daughter Birgitta Lilliehöök, later also a well-known author. One year after the exhibition, Barnens Paradis was moved into the Liseberg amusement park and Greta Holmgren’s creation has since then characterised the profiles of Gothenburg and Liseberg.

As if the work on Barnens Paradis had not been enough, Greta Holmgren also wrote a children’s opera in 1923: De tre mostrarna or Flickan som spann guld av långhalm (“The Three Aunts” or “The Girl Who Spun Gold out of Straw”), the music to which was composed by Kurt Atterberg. She continued to publish story books like Tant Lisas sagor in 1925, and Riga Rabels källa och andra sagor in 1956. In 1939, she published an autobiographical book with memories from her growing-up in Uppsala: Hemmet med de öppna dörrarna. The book started as follows: “My first memory is characteristically enough an open door. It was at St Larsgatan in Uppsala.”

After her Barnens Paradis success, Greta Holmgren was given an appointment at Dagens Nyheter to edit the children’s page. In the 1960s, she read children’s stories on the radio. Her creativity continued to be a strength her whole life. In her old age, she enjoyed doing free embroidery.

Greta Holmgren died on 17 November 1961, at 91 years of age. She is buried in the Holmgren family grave in Uppsala Old Cemetery. 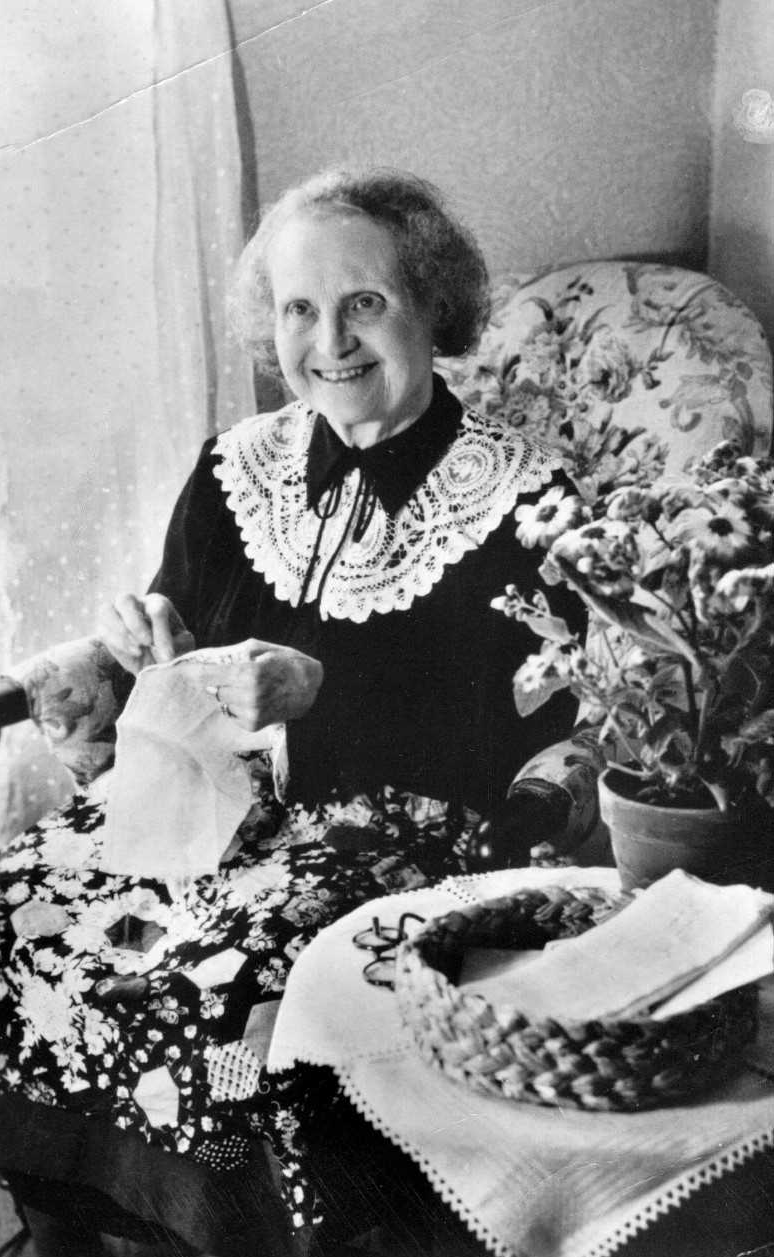