After attending Lidingö municipal grammar school and matriculating in 1929, she studied art history and classical and Nordic archaeology at the Stockholm college, nowadays the University. During her studies in art history in 1929, she got to know Berit Wallenberg. They became friends for life. When Berit Wallenberg created her research foundation Stiftelse för konst- och kulturhistorisk forskning in 1955, Ann-Sofi Schotte-Lindsten became one of the members of the permanent scientific council belonging to the foundation. She was a member until 1979 when she retired for reasons of age.

At the beginning of the 1930s, Ann-Sofi Schotte-Lindsten participated in the archaeological digs at Alvastra convent ruins. Important finds of skeletal remains were considered to belong to Saint Birgitta’s husband Ulf Gudmarsson and their two small sons. The finds were transported to the Historiska museet in Stockholm for an osteological examination. When the foundation Birgittastiftelsen in Vadstena strove to return the remains to Alvastra in the 1980s and 1990s, Ann-Sofi Schotte-Lindsten’s memories of the move to the museum were of great assistance. The remains were found and reburied at Alvastra in 2003.

In the 1930s, Ann-Sofi Schotte-Lindsten began studying ethnology with Professor Sigurd Erixon. The second world war and a changed family situation delayed her Licentiate Degree in ethnology until 1948. Fiskeplatser på nordligaste Öland, published in 1948, was one of her studies. In 1939, she started working as a museum official at the Östergötland Museum in Linköping. One task was to document old buildings. She met the architect Gunnar Lindsten there. They married in 1942. Their first child was born the following year and according to the practice of the time, Ann-Sofi Schotte-Lindsten was dismissed from her post.

In the mid-1940s the county architect organisation was developed. Gunnar Lindsten had appointments first in Karlskrona, and later in Kalmar. Ann-Sofi Schotte-Lindsten was given part-time work in the county museums. Her work included traditional museum tasks, archaeological digs and research as well as giving lectures at adult education institutes and for folk high schools and home district associations in the county. In 1951, a memorial booklet was published about Söderåkra: Söderåkra – Socknen och Sparbanken. Ann-Sofi Schotte-Lindsten was the editor and also author. It includes articles on the school, poor relief, and church — subjects that reoccurred in her later works. She participated in a mapping out of globes in Södermöre municipal district. It was in Kalmar that her work as a local historian, teacher and popular educator began. In 1949, the family’s second child was born.

At the end of the 1950s, Ann-Sofi Schotte-Lindsten became responsible for the Kalmar art museum. The board considered that she did not need a salary since she was married. Parallel to this, she therefore became a stand-in teacher in art history at the girls’ school in Kalmar. She decided to change her profession and read pedagogics and political sciences in order to become a teacher. This was very suitable as Gunnar Lindsten was appointed to the post of assistant county architect in Örebro. The family moved to Ekeby south of Örebro and Ann-Sofi Schotte-Lindsten was given a post at Kävesta folk high school in the neighbouring town of Sköllersta. Through their summer cottage in Ekenäs, they kept their contacts with Kalmar. One example is the work Nyttoslöjd och konsthantverk kring Kalmarsund that she wrote in 1970 with the ethnologist and textile researcher Gertrud Grenander Nyberg.

At Kävesta, Ann-Sofi Schotte-Lindsten taught social sciences, history and geography. She participated in the school’s outwardly focused popular education and made contacts in the district. In 1973, Kävesta folk high school had its 100th jubilee and for that she put the old school in order with its observation collections and teaching materials from the school’s first years. Ann-Sofi Schotte-Lindsten served at Kävesta until her retirement in 1976.

The district that Ann-Sofi Schotte-Lindsten had settled down in was Sköllersta, consisting in 1952 of the three parishes Sköllersta, Svennevad and Bo. In 1971, the municipality was amalgamated with Hallsberg and became Hallsberg municipal district. A wish was expressed in the district for a municipal history, preferably in the spirit of Sigurd Erixon. Ann-Sofi Schotte-Lindsten was engaged. She accepted the post of editor and also as author of a few chapters in her own field. After her retirement, she began on what was to become a great work of local history consisting of four volumes on the Sköllersta district and a study guide. The first book appeared in 1978, and the last, the study guide, in 2004. Her co-editors were Margit Werner, a university lecturer in Gothenburg, and also Berit Forsberg, previously a teacher at Kävesta who helped with the study guide. There was also a working group consisting of residents of the district. For Ann-Sofi Schotte-Lindsten, the contact with what was then Örebro College was vital. She had partly participated in a course on local cultural patterns and partly attended the open seminars on local history held in Örebro. Several of the teachers came to support her work on the Sköllersta project.

In this project, Ann-Sofi Schotte-Lindsten wrote articles on churches, schools and hospitals and other places of general public usefulness, on art and politics. However, her aim above all with the project was that authors should be selected from the district, and from researchers at the local university and archives, that contributions should be coordinated and that the local district should be anchored in the national consciousness. For this work, Ann-Sofi Schotte-Lindsten was awarded an honorary doctorate in local history in 1990 at Uppsala University.

For Ann-Sofi Schotte-Lindsten, the documentation of the Sköllersta district was important. It was just as important to communicate this knowledge to the people living there. In 1983, the Örebro county home district association rewarded Ann-Sofi Schotte-Lindsten for her work on her home district with the Djurklou Medal. In 1984, she received the Hallsberg municipality’s culture award. Nordiska museet brought attention to her work in 1993 with the medal for service to her home district. In 1997, she received the Hjalmar Bergman prize for her authorship.

Her interest in art history existed side by side with local history which is apparent in various articles on churches and church inventories that are included in the Sköllersta home district books. In 1985, Ann-Sofi Schotte-Lindsten wrote an article about Katarina av Vadstena, Saint Birgitta’s dotter. She belongs to the triptych in Ekeby Church and may be a copy of a sculpture that disappeared from Vadstena Convent. A copy was made, and Ann-Sofi Schotte-Lindsten was present when Pope John Paul II blessed it in Vadstena in 1989. In 1995, she wrote yet another article on the late medieval madonna images in Närke and in 2002 she was appointed as the 2002 Strängnäs founder for having ”made the middle ages come to life, Mary be loved and Sköllersta known”, according to the bishop of Strängnäs Jonas Jonsson. In 2003, the Örebro county museum published the work Dulcedo et Spes Nostra – Medeltida Mariabilder från kyrkor i Närke by Ann-Sofi Schotte-Lindsten, Inger Dolk and Ulla Karregård in its series of scientific booklets.

In 1974, Medborgarskolan in Örebro and Stockholm University organised a basic course in art history, followed by a more advanced course, both with Ann-Sofi Schotte-Lindsten as teacher. Several of the participants continued art studies in the form of adult education with her as their teacher. The church was for Ann-Sofi Schotte-Lindsten apart from a building with various objects also an activity, and she participated in the municipal church work in both Ekeby and Örebro whither she moved in the mid-1980s after the death of her husband. In the Olaus Petri congregation, she participated in the church’s work of visiting and was a significant colleague as an art historian when the church was restored in 1986—1987.

Ann-Sofi Schotte-Lindsten died in 2009. Her funeral took place in Olaus Petri Church, and her burial was in Ekeby Cemetery. 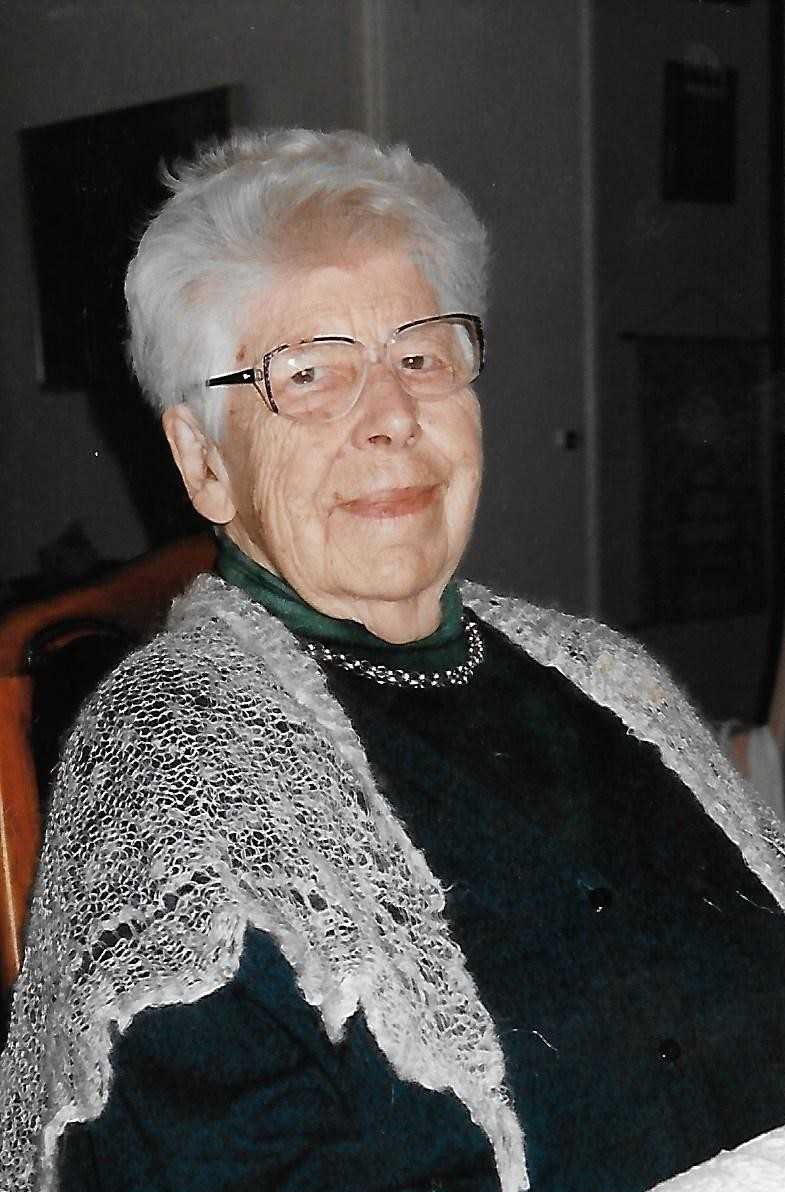