Anita Lindblom was one of Sweden’s leading artists within music, film, and cabaret from the mid-1950s until circa 1980. Parts of her life were often subject to press attention and provided many a headline for newspaper billboards.

Anita Lindblom was born in Gävle in 1937. Her mother, Elsy Lindblom, was only 17 when she gave birth and she handed her new-born daughter over to her own mother, Edit Lindblom, a professional weaver. After spending two years living in her hometown Anita Lindblom and her grandmother moved to Uppsala. When Anita Lindblom was eight years old she and her maternal grandmother moved yet again, this time to Stockholm, where her mother was already living. Despite precarious finances Edit was able to purchase a piano. Anita Lindblom, inspired by a classmate, joined a ballet school and remained a member for several years. The school was run by instructor Maj Diver. Anita Lindblom has recounted that “ballet and the piano served as early steps towards a future on the stage”, in her autobiography Anita, published in 1983.

Anita Lindblom did not enjoy being at school and longed for the time when she would be an adult. During her free time she often made her way to Nalen amusement centre despite her maternal grandmother’s protests. Following a competition she entered there she was asked to audition as a dancer for Södra teatern. She got in and qualified to perform on the theatre’s summer tour, which she termed her “first chance to be a part of the artistic sphere”.

In 1954 the Casino revue show advertised for female ballet dancers and Anita Lindblom was again asked to audition. She was taken on for a forthcoming tour. During rehearsals she entered into a relationship with Sven Lykke, the ballet director who was 20 years her senior. As Anita Lindblom put it: “One day I suddenly discovered that I was pregnant”. She was only 17 years old. A brief marriage ensued and in May 1955 her son Jörgen was born. Fortunately Anita Lindblom was soon asked to return to the Casino revue show at Scalateatern, where she made her public debut in 1956, singing “Va vore livet utan raff, det vore ett syndastraff”. Her deep, dark, and expressive alto voice was received with widespread acclaim. During 1957 Anita Lindblom appeared in her first revue show together with Sven-Bertil Taube at the Bacchi Wapen restaurant.

That same year, 1957, Anita Lindblom was crowned Miss China at Chinateatern, and as such her role involved introducing artists to the stage. She also performed as a dancer and as a singer. In the autumn of 1957 she returned to Scalateatern where she won a lot of acclaim for her appearance in the revue show when performing the song “När den svenska flickan kysser, kysser hon med öppen mun”. Although Sveriges Radio boycotted this song it nevertheless became her first record industry breakthrough. It was the song “Sån’t är livet” which gave her her first major breakthrough in October 1961. The song became a major hit thanks to its launch on Radio Nord – a so-called pirate radio station which operated off the Stockholm coast. The record sold over 600,000 copies and was also a hit in Norway and Denmark. The royalties flowed in and Anita Lindblom used them to purchase a large house in Lidingö, which she named Villa Fontana in honour of her record label. At this time she became a regular figure on the celebrity social scene.

Anita Lindblom’s successes in Sweden enabled her to work on the Continent, primarily in Germany where she was first successfully launched on a 1962 TV-programme called Schaubude. Shortly thereafter she was hired by Harald Vock, a TV-producer who created several expensive shows for her. The highlight of these performances was “Lass die Liebe aus dem Spiel”, a German version of “Sån’t är livet”. Anita Lindblom has recounted how the press termed her: “Sexkatze aus Schweden”. She recorded ten singles in Germany, most of them during the 1962–1964 period, and some of them made it into the charts. She also recorded two solo LPs during this time.

Anita Lindblom recorded over one hundred records from 1956, including around twenty albums, mostly compilations. Two are worthy of special note: firstly, her popular and critically-lauded 1973 album of Edith Piaf songs, and secondly, her 1974 album entitled Anita Lindblom sjunger Jules Sylvain, which went gold. Following her performance at Gröna Lund in 1977 she released an album of Evert Taube music called Kom i min famn. The next year, 1978, in Hollywood she recorded an album of songs by one of her all-time favourites, Neil Sedaka, called Love in the Shadows for which Claes af Geijerstam was the musical director. On her last album, released in 1982, Anita Lindblom sings gospel in Swedish. Several compilation albums and CDs have been released since she brought her singing career to an end, the most recent during the 2000s.

One of Anita Lindblom’s major spheres of activity was acting. She appeared in a total of eleven films, in most of which she also sang several songs. Her film debut occurred in 1957 when she appeared in two comedies, Räkna med bråk with Carl-Gustaf Lindstedt and Arne Källerud in the title roles, and Åsa-Nisse i full fart, directed by Ragnar Frisk, in which she acted together with the veterans John Elfström and Artur Rolén. She also played smaller roles as a ballet dancer and a model in Hasse Ekman’s 1958 Jazzgossen and Arne Mattsson’s Mannekäng i rött, also 1958.

Anita Lindblom had a lead role in the 1961 farce Vi fixar allt, directed by Ragnar Frisk, appearing along with the duo of Lindstedt and Källerud again. She and Thore Skogman played the two leads in two Ragnar Frisk films from 1963 and 1964, Tre dar i buren and Tre dar på luffen. She returned to work with director Arne Mattsson in 1964, appearing in a new edition of Blåjackor. Her final film with Ragnar Frisk was the 1966 farce Trettio pinnar muck in which she and Jokkmokks-Jokke played the leading roles.

Anita Lindblom appeared in another two films: Roy Andersson’s first major film, En kärlekshistoria from 1970, and the 1974 film Rännstensungar, a new edition of a much-loved film from the 1940s. This later version was directed by Torgny Anderberg. Both these films were favourably received by the critics.

During the 1960s and 1970s Anita Lindblom appeared in a raft of revue shows and pub shows. Several of these deserve attention. During the early 1960s she first performed at Kystens Perle in Copenhagen followed by Chat Noir in Oslo. Both performances, according to her own account, were great successes. She worked with Hagge Geigert in Uddevalla in 1962 and in 1964. She appeared on the Hylands hörna TV-programme in 1962 and then again in early 1965. During the 1965–1966 period, in Gothenburg and at Hamburger Börs in Stockholm, she performed a number called “Vickande tango”, moving with erotic snakelike movements clad in a spangly dress “to the pub audiences’ delight and the ire of the cultural reviewers”. Hasse Ekman selected Anita Lindblom as his star performer for the 1968 New Year revue show produced at Folkan. It was a financial success and ran for eight months, and Anita Lindblom received glowing reviews. That same year she and Eva Rydberg set up their own, successful pub show. In the early 1970s, in Paris, Anita Lindblom met the well-known director Lars Schmidt, then married to Ingrid Bergman, and he offered her the lead role in a musical called Applause but she turned him down. He later offered her the chance to play Eliza in the musical My Fair Lady but she once again turned him down – two remarkable rejections, perhaps.

In 1976 Anita Lindblom made her comeback on the Swedish stage following six years spent abroad. The place was Hamburger Börs in Stockholm. Gunnar Hellström directed the show and Anita Lindblom was a great hit, in what was most indisputably the greatest success of her career. However, when the same show was produced at Kronprinsen in Malmö it did not achieve the same level of success. In 1977 Anita Lindblom performed for the first time at Trägår’n in Gothenburg. She enjoyed great triumphs and the venue accrued profits like never before. However, on her return to Trägår’n a year later the atmosphere and the arrangements were completely different. Nothing worked. Anita Lindblom was forced to take sick-leave and was replaced by Bosse Parnevik. She had a similar negative experience on her return to Hamburger Börs in 1977. A dispute with the venue’s new owner led the pub management to fire her. Nevertheless, that summer Anita Lindblom performed six concerts at Gröna Lund. In 1979 she appeared as a guest on the Party hos Parnevik TV-programme. During 1981 she appeared on both Gäst hos Hagge and Janne Carlsson show. In March 1982 she, along with various other artists, performed at the re-opening of Chinateatern in Stockholm. In what was her final artistic performance in Sweden she sang “You can have him” – the original for “Sån’t är livet” – along to a backing track.

Anita Lindblom’s autobiography does not shy away from discussing her romantic encounters. Two of the men involved were particularly significant for her career: the German producer Klaus Lorenzen, to whom she was engaged from 1963–1964, who had a positive impact on several of her recordings, and the actor and director Gunnar Hellström, with whom she lived from 1975–1977, who had a definitive impact on her return to the Swedish stage.

Previously, in early 1966, Anita Lindblom had met the boxer Bosse Högberg and they got married that same year. Their marriage was a stormy one and for one reason or another their personal life often made the tabloids and evening papers. Bosse was imprisoned for insurance fraud for a whole year during the relationship. Anita Lindblom had previously managed her taxes through a company registered in Lichtenstein. However, in 1969 she was subject to discretionary tax assessment which led to mounting debt. She sold Villa Fontana. Where did the money go? The authorities chased her for taxes owed. It was decided, when she declared herself bankrupt, that she should be subject to a travel ban. Despite this, she and Bosse fled Sweden and settled in Paris from whence the Swedish authorities were not able to extradite them. Anita Lindblom was suffering however. “Being persecuted by the Swedish authorities, being chased by the press, and the never-ending fights with Bosse” she wrote, led her to attempt suicide in 1970. She was saved in the very last minute. Shortly thereafter she divorced Bosse.

France became Anita Lindblom’s new home from 1969 onwards and she lived in Paris until 1977. Then she moved to the French Riviera, to a place named Théoule-Sur-Mer near Cannes. According to many unanimous witnesses she was very happy there and there was nothing she missed from Sweden, as she said in newspaper interviews. She was very proud of her career and was not sorry that it had ended comparatively early. Her new passions were flowers and cats. After 1982 her visits to Sweden became increasingly few and far between.

Anita Lindblom died in September 2020, aged 82. At that point she was poor and alone albeit not forgotten. Attractive, tough, cool, sexy, bold, and multitalented are the positive concepts tied to memories of her. Sometimes these are accompanied by negative images such as divaesque, annoying, and not always loyal to the contracts she signed. If certain events had unfurled differently, Anita Lindblom could well have been one of Sweden’s greatest artists. In the end she was just one of several big artists. 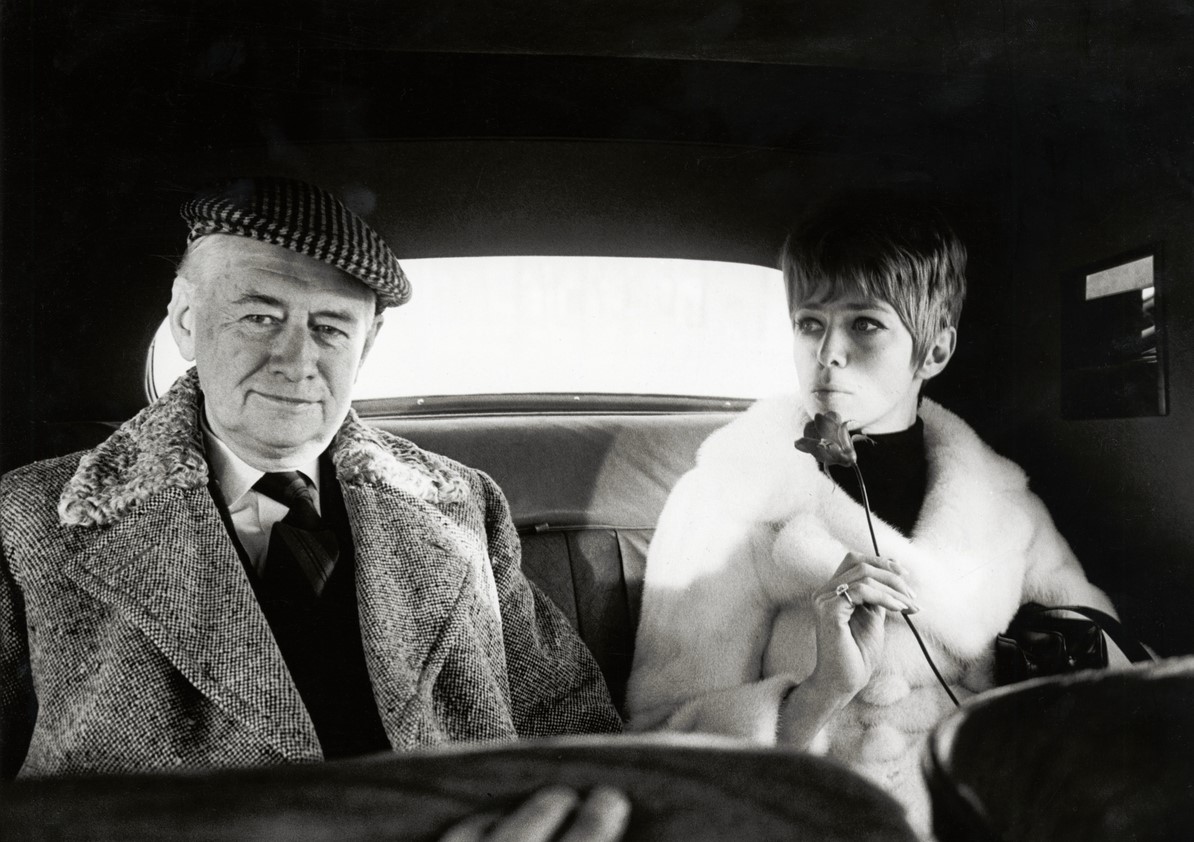