Alva Myrdal was a Social Democratic politician, a cabinet minister, and a diplomat. She was awarded the Nobel Peace Prize in 1982.

Alva Myrdal was born in 1902. She was the eldest of four children and came from a relatively wealthy home in which both education and politics were viewed favourably. Her father, Albert Jansson, was a building contractor who harboured socialist visions whilst her mother, Lowa Larsson, was a liberal who had aesthetic interests. At the time of Alva Myrdal’s birth the family was living in Uppsala. When Alva Myrdal was 12 years old her father was financially well-off enough to realise his dream of running a farm. Against his wife’s wishes he then purchased her childhood home in Slagsta, Eskilstuna.

Although Alva Myrdal completed her public school education she was not allowed to fulfil her wishes to continue onto higher education. In defiance of her mother’s ban on borrowing library books Alva Myrdal and her friend Marta Fredriksson regularly visited the local library to feed their intellectual interests. In order to get funds to buy books and for her studies Alva Myrdal would sew and make handicrafts for sale and it was her income from sewing which allowed her to complete business school in Eskilstuna. Her first job was at the municipal audit office. She combined her office duties with a correspondence course in astronomy. Her passion for reading continued unabated and finally her father acquiesced and convinced the Eskilstuna high school to prepare a small group of female students – including his daughter Alva – to gain their school-leaving certificates as private students.

Alva Myrdal obtained her certificate in Stockholm in June 1922 at the Högre allmänna läroverket för gossar (advanced general school for boys) in Norrmalm (later known as Norra Latin). At this point Gunnar Myrdal came to play a significant role in her life. They had met in the summer of 1919, and it was in connection to her school exams that Alva Myrdal moved to Stockholm to be with Gunnar Myrdal, who was studying law at Stockholm college. Alva Myrdal herself began to read Nordic languages, literature, and history of religions. She gained her Bachelor’s degree around the time that she married Gunnar Myrdal in October 1924. She then began to study psychology and pedagogics. Her intention was to gain her licentiate by writing a dissertation entitled ‘Kritik av Freuds drömlära’ but she never completed it.

The surviving correspondence between the Myrdal couple – which serves as the basis for Yvonne Hirdman’s book Det tänkande hjärtat. Boken om Alva Myrdal – reveals that the two of them shared mutual intellectual interests as well as a strong sense of social engagement. The letters also reveal that Alva Myrdal suppressed her own, and later also her children’s, needs in favour of those of her husband. In 1929 Gunnar Myrdal was awarded a stipend to travel to the USA and Alva Myrdal accompanied him. During the year they spent overseas their then two-year old son Jan was sent to live with his paternal grandparents. According to his sister Sissela, who has portrayed her mother in her book Alva. Ett kvinnoliv, Alva Myrdal later regretted taking this decision.

Whilst she was in the USA Alva Myrdal deepened her studies of social psychology, social pedagogics, and sociology, which were all subjects related to Gunnar’s research into economics. During the couple’s American visit they co-authored the basics of what became the book Kris i befolkningsfrågan which, on its publication in 1934, generated a lot of commotion and discussion. The book analyses the consequences of industrialisation, including the demographic crisis caused by falling birth rates, and makes the case for pre-emptive socio-political measures. Child support, parents’ allowance, and other similar contributions would help to increase the birth rate. However, for children’s sakes, both the number of offspring and parenting should be regulated. The book thus promotes sterilisation for those who for a variety of reasons would be considered as unsuited to parenthood.

In contrast to the conservatives, who wanted to solve the demographic crisis by reverting to the social conditions associated with agrarian society – in which the family was both the unit of production and consumption – Alva and Gunnar Myrdal’s view of society was progressive and basically took a positive view of industrialisation and modernisation. As long as politics engaged the whole of society any negative consequences could be dealt with.

During the 1930s Alva Myrdal focused on family policies. She and the architect Sven Markelius initiated the erection in Stockholm of a communal housing building which was completed in 1935. The building included communal spaces which was intended to reduce household chores. The next year, in collaboration with the architect Sven Wallander, founder of HSB, and others she set up the Socialpedagogiska seminariet (socio-pedagogical programme) in Stockholm in order to train pre-school teachers. The programme was based on Alva Myrdal’s book Stadsbarn in which she promoted day-care centres as a means to socialise children whilst also giving women a chance to earn an income. Alva Myrdal was the principal of the teaching programme and served as its figurehead for a long time.

Alva Myrdal put her societal visions into practise in her private life. In 1937 the family moved into one of Alva Myrdal’s project homes in Äppelviken. Its modern functionalist architectural style generated a lot of attention as well as the fact that each space was designed to provide for the needs and functionality of the modern family with young children. By this time the Myrdals had three children and work and family life became entwined within the family home. Alva Myrdal was able to work outside the home by dint of hiring a nanny because – despite ambitions of sexual equality – she still retained most of the responsibility for both the home and the children. Shortly before the Second World War broke out the Myrdals once again travelled to the USA. Whilst she was there Alva Myrdal completed her book Nation and Family, which summarises Swedish welfare policies and was intended for an international audience. At the same time as she worked on the book she was also a driving force behind the international organisation for working women.

Upon returning to Sweden from America Alva Myrdal became involved in post-war politics, initially in Sweden and later at an international level. She had been a member of the Social Democratic party since the early 1930s and she became involved in determining the post-war programme of the workers’ movement during the 1940s. Alva Myrdal became very influential within her areas of specialism – namely education and family policies. Her periods spent overseas had meanwhile given her insights into international politics and she became an early promoter of a supranational organisation which later became the United Nations.

Alva Myrdal took a position of compromise during the Cold War. She believed that Sweden should play an important role in mediating between the East and the West. Per Thullberg’s article in Svenskt biografiskt lexikon reveals that this was a successful albeit controversial stance to hold and her activism in matters of international cooperation, the peace movement and the disarmament movement all contributed to her appointment as the Swedish delegate in a variety of international contexts after the war.

Alva Myrdal was appointed head of the United Nations’ social section in the newly established United Nations building in New York. This was a top-ranking position which she nevertheless resigned from after just a year. Gunnar Myrdal, who had resigned from his post as minister of trade following harsh criticism, had accepted the post of head of the United Nations’ European commission based in Geneva. As the family relocated there Alva Myrdal found that the distance between her family and her post in New York was too great. She was then offered the post of head of UNESCO’s social sciences section in Paris, which she accepted. By living in Paris she could regularly maintain contact with her husband and two daughters, Sissela and Kaj, in Geneva.

Alva Myrdal created an international research department in Paris and she was also in charge of several major research projects into global problems. Her 1953 lecture “A Scientific Approach to International Welfare” made the case that fighting poverty had to go hand in hand with long-term political, cultural and social measures. In the mid-1950s she was appointed Swedish ambassador to New Delhi, and as such became the first female Swedish ambassador. Gunnar Myrdal had at this point just initiated studies of this part of the world and so the Myrdal couple were able to have a shared home for a while. Alva Myrdal became very close friends with Jawaharlal Nehru, then prime minister of India, and through Alva Myrdal’s persistence the so-called ‘U-landsfrågor’ (third-world issues) became an important element of Swedish foreign policy. When the Myrdal couple returned to Sweden in the 1960s Alva Myrdal served as a government expert in these matters. She became an advisor to the foreign minister and her understanding of the best way to support disarmament lay the foundation for the direction of Swedish foreign policy.

Whilst serving as a member of parliament – she was elected as such in 1962 – Alva Myrdal also served as the Swedish delegate to the disarmament negotiations in Geneva, and a few years later she was appointed cabinet minister with a particular responsibility for matters regarding disarmament. Alva Myrdal’s deep knowledge in the area gave her an effective voice on behalf of countries that were not in alliances.

During the 1960s and 1970s Alva Myrdal’s political mission was peace and disarmament. Just as in her previous specialisations of family policy, educational policy, equality issues and inequality between global nations, she strove to see political measures based on scientific grounds. It was at her suggestion that Tage Erlander’s government set up an international peace research institute, the Stockholm International Peace Research Institute (SIPRI), of which she served as the first chair.

Sexual equality, an issue which Alva Myrdal had long championed, became reality during the 1960s and she led the working group for equality issues which was set up by the Social Democratic party along with LO (the Swedish trade union). Several of the equality reforms of the 1970s stem from proposals made by this group. The demand for a 6-hour working day – an important issue for Alva Myrdal – was never realised. She was also not able to introduce a separation between church and state even in her role as minister of religious matters.

In 1982 Alva Myrdal was awarded the Nobel Peace Prize along with the Mexican diplomat Alfonsa García Robles. The lecture she gave in conjunction with this award expressed her disappointment that her urgent work for disarmament and peace had produced such poor results, but she nevertheless placed her hopes in the grassroots peace movement.

Alva Myrdal died in 1986. She is buried at the Norra cemetery in Stockholm. 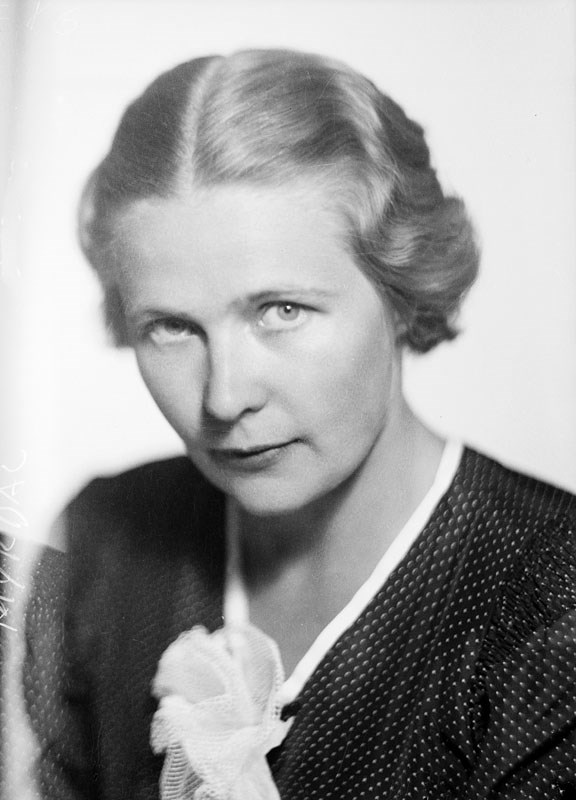