Alma Johansson was a Swedish missionary who witnessed the Armenian genocide in 1915 in Ottoman Turkey. She disseminated her testimony through various channels and undertook humanitarian efforts on behalf of Armenian refugees.

Alma Johansson grew up in a farming family in Hållunda in Uppland. She had already heard about the plight of the Armenians when she was 19 years old and felt called to contribute on their behalf. In 1902 she set off as a missionary of Kvinnliga Missions Arbetare (KMA) (Female missionary workers), an organisation which had been set up in 1894 by Swedish women including Fredda Hammar in order to support women in foreign lands. Alma Johansson first undertook a one-year training course at the German missionary school Bibelhaus Malche, Freienwalde an der Oder. As part of the training she also spent three months working at a Berlin hospital. She then made her way to the mission camp in Turkey. Initially she worked in Emaus, a Danish children’s home in Mezereh (now Elâzığ) and at a German children’s home, Deutscher Hülfsbund für Christliches Liebeswerk im Orient. There she cared for Armenian children who had lost their parents during various massacres. Once she had completed her 1908–1909 training as a midwife in Stockholm and Geneva she worked in the city of Musch (Muş) from 1910–1915. She and Bodil Biørn, a Norwegian nurse and fellow KMA-missionary, ran a children’s home connected to Deutscher Hülfsbund. Whilst treating patients at a polyclinic they also provided ambulant medical care to Armenian and Turkish homes. Following the outbreak of the First World War they entered the service of the Red Cross as nurses to care for wounded soldiers in the area.

When the violence spread to Musch Turkish soldiers locked the Armenian children into a building and set it on fire. Alma Johansson pleaded in vain with the governor and Turkish soldiers and local officials. She suffered great dismay at not having been able to save the children whom she saw as her own. Nevertheless, she was able to save a few Armenian teachers and girls from certain murder. After this development she travelled alone, by horse, through a war-ravaged Turkey in order to deliver her testimony in Constantinople (now Istanbul).

Alma Johansson’s account of the genocide to American and German diplomats was quickly published, along with other eye-witness accounts, included in the so-called ‘instructional book’ The Treatment of Armenians in the Ottoman Empire, which was published by the British government. This report is one of the most important sources which documents the genocide. A few years later, in 1930, Alma Johansson published another eye-witness account entitled Ett folk i landsflykt. Ett år ur armeniernas historia. Her book reveals that the plans to massacre the Armenian people had come from the highest levels and that they had been known about since 1914. The local governor in the district she worked in had openly declared that “at the first suitable occasion the Armenians should be massacred and their race eradicated”.

After almost all the Armenians in Musch had been murdered Alma Johansson was forced to return home to Sweden in 1915. Her Scandinavian co-workers remained in the area for a while. She was extremely exhausted on her return home. Her recovery was partly due to a stay at the Björkliden sanatorium in Tyringe, northern Scania. She also spent some time working for Vita Bandet (white ribbon temperance movement) in Stockholm and at the KMA children’s home in Blekinge.

Following the end of the First World War Alma Johansson and her Danish KMA colleague Wilhelmine Grünhagen returned to Turkey in order to help Armenian refugees. As foreign aid workers and missionaries were forbidden from travelling to the Armenian parts of Turkey she spent an initial period working in an Armenian refugee camp in Makrikeu and Skutari, near Constantinople. There she served as a house-mother at an American children’s home which was tied to the American Board of Commissioners for Foreign Missions (ABCFM). She also organised meetings for women and children and made home-visits. She even began to learn Turkish.

Once she had recuperated from an operation and a period in hospital in Sweden she was given the chance to begin working for the American organisation Near East Relief, helping Armenian refugees in Salonica (now Thessaloniki) in Greece. She remained there until she retired in 1941, helping Armenians who had survived the genocide and who were living in desperate conditions in refugee camps. In addition to handing out food, clothes, and medicines, she also set up four schools for the children and sewing workshops for women as a means to allow them to help themselves. Selling the Armenian handicrafts in Sweden became an important source of income to the Armenian refugee women. Alma Johansson also made home-visits and emphasised the importance of listening to the refugees’ stories as a way of easing the trauma they had suffered. She also played the organ and was the choirmaster at the Armenian-Protestant parish services.

Every year Alma Johansson wrote several articles on these refugees’ suffering for the KMA journal När och Fjärran. In 1931 she also published a piece called Armeniskt flyktingliv. When Swedish women read her reports from the camps they collected money and clothes, and bought Armenian handicrafts. Women would also meet and hold sewing workshops and send their own handicrafts to the Armenian women in refugee camps in Thessaloniki. Within the KMA framework a cross-border exchange of handicrafts developed, forming a bond between Swedish and Armenian women. When Alma Johansson went home for holidays she undertook nationwide speaking tours in order to meet these women who sewed and to disseminate information.

När och Fjärran also allowed readers to experience a variety of different Armenian life stories as Alma Johansson recounted them. The journal also contained a number of pictures and photographic material, including photos from the Thessaloniki refugee camp.

When the Swedish Crown Prince Gustaf Adolf and his wife Louise visited Thessaloniki in 1934 Alma Johansson addressed the royal couple and then took the opportunity to present them with a piece of Armenian handicraft whilst informing them of her work among Armenian refugees in Thessaloniki. A few weeks later she received a thank-you letter from the princess which contained a sum of money to be donated to the humanitarian enterprise. The Crown Prince’s uncle and aunt, Prince Oscar and his wife Ebba Bernadotte, were heavily involved in KMA and had funded Alma Johansson’s midwifery training. Their daughter, Countess Maria Bernadotte, was a member of the KMA board and for a time served as chair of the Armenian committee. The duchess and author Sigrid Kurck, from Ystad, was also active in support of the Armenians in both the Swedish and Danish branches of the KMA. She also lobbied on behalf of the Armenian cause within international organisations in Geneva during the 1920s and thus placed Alma Johansson’s field work into a wider international context.

Alma Johansson worked in Thessaloniki until she retired in 1941. She thus experienced the Second World War and the German occupation of the town. She was forced to travel to Sweden for a kidney-stone operation in 1941 and had actually intended to return to Greece, despite having reached retirement age. This became impossible due to the ongoing war. Instead she maintained her contacts with her Armenian friends through correspondence and by writing articles on the Armenian refugees in När och Fjärran. The majority of Armenians left Thessaloniki and settled in various countries across Europe and America, and in the Armenian Soviet republic. By 1947 there were almost no Armenians left in Thessaloniki. Alma Johansson continued, in her retirement in Sweden, to collect clothes for Armenian children’s homes in the Middle East and to distribute Armenian handicrafts when she could.

On New Year’s Eve 1974 Alma Johansson died, aged 93, at Fredhällshemmet in Stockholm. It is said that she spoke in Armenian on her deathbed. Swedish-Armenians lay flowers at her grave in the Skogs cemetery in Enskede to honour her memory on the day of commemoration for the Armenian genocide, 24 April. 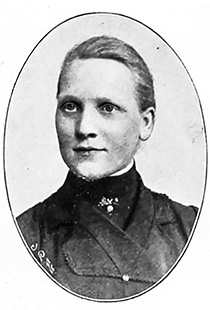