Alma Detthow (1855-1937) grew up in Södermalm, Stockholm in very poor circumstances. She was born out of wedlock to the seamstress Charlotta Matilda Gaurde (later Detthow). Her father’s identity remains unknown. Alma spent her childhood living with her mother and her half-brother, Rudolf Theodor Detthow, in the home of Lovisa Christina Nordström, who had been Charlotta Matilda Gaurde’s foster mother. It was not until the mid-1860s that Alma was registered as Detthow (also Dettow) in household examination records.

The same year that Alma turned 14 she was enrolled at the Adolf Fredrik school, where she spent three terms before leaving school in the early 1870s with good grades. Before she had turned 16 she was employed as a substitute teacher at her old school and soon also became a substitute teacher at the Kungsholm school. She was even made responsible for a section of her own at the Adolf Fredrik school.

In the autumn of 1873 Alma Detthow was accepted at the Stockholm teacher training school and in 1876 she graduated with the highest marks in several subjects. During her studies (from 1871 to 1873) Alma continued to work as a substitute teacher at various schools in Stockholm. After graduating she was employed as an assistant schoolteacher at the Maria school in Stockholm. She worked there until 1879 when she was forced to leave her job after having participated in a protest against the school’s head teacher, Sven Nilsson. At that point Alma Detthow had already formed such a well-developed network of contacts that she was immediately recruited by Johan Löfvén for his small teacher training school, which had been established in conjunction with the new Primär- och elementarskolan in Stockholm (from 1881 known as Ateneum för flickor). Alma was employed at this training school until 1896 whilst also teaching mathematics at Ateneum and the Brummer school.

Alma was forced to leave the teacher training school in 1896 after a period of illness in the autumn of 1895. However her real reason for leaving was her determination to set up her own training school. Alma had already investigated the possibility of taking over the small training school she was employed at in 1893, but to no avail. When she opened her own school – the Detthow school – in autumn 1896 it was initially very small-scale, and functioned primarily as a test school for the private training school she founded the same year. The numbers of students at the Detthow school increased rapidly and during the 1910s there were nearly 600 students. The school’s preparatory classes were open to both boys and girls, while the upper classes were exclusively for girls.

Alma Detthow led the school completely according to her own design and she established two new sections within it during the years 1903-1904. The first of these followed the same programme as at other girls’ schools whilst the second adopted the programme taught at the state secondary schools for boys. The Detthow school became somewhat of a prototype for providing equivalent teaching programmes for girls and boys, and in 1908 Alma gained the right to hold secondary school exams at her school.

Alma Detthow’s activities mainly involved teaching and philanthropy. Her adult life can roughly be divided into four distinct periods, where she was primarily active as a schoolteacher, training teacher, school founder and philanthropist. Previous research into Alma Detthow’s period as a schoolteacher has revealed that it was the teacher Laura Lundström who inspired Alma to take the same path.

Descriptions of Alma Detthow portray her both as hardworking and deeply religious, but also clearly informed by her simple origins and remarkable journey of social improvement. These aspects inspired her notable work on behalf of women in need whilst also explaining the high demands she placed on those in her environment. During her lifetime Alma Detthow formed a solid network of contacts and very quickly became part of Prince Oscar and Ebba Bernadotte’s social circle. Her school also helped her to form lasting connections, including, for example with the women's suffrage activist Alma Sundquist and the first female Swedish doctor, Karolina Widerström.

Alma Detthow appears to have lived with her mother until her mother’s death in 1914. Alma had no children of her own; however, three of her nieces attended the Detthow school and one of them also lived with Alma for a time.

Alma died in 1937 and is buried at Norra cemetery in Stockholm. 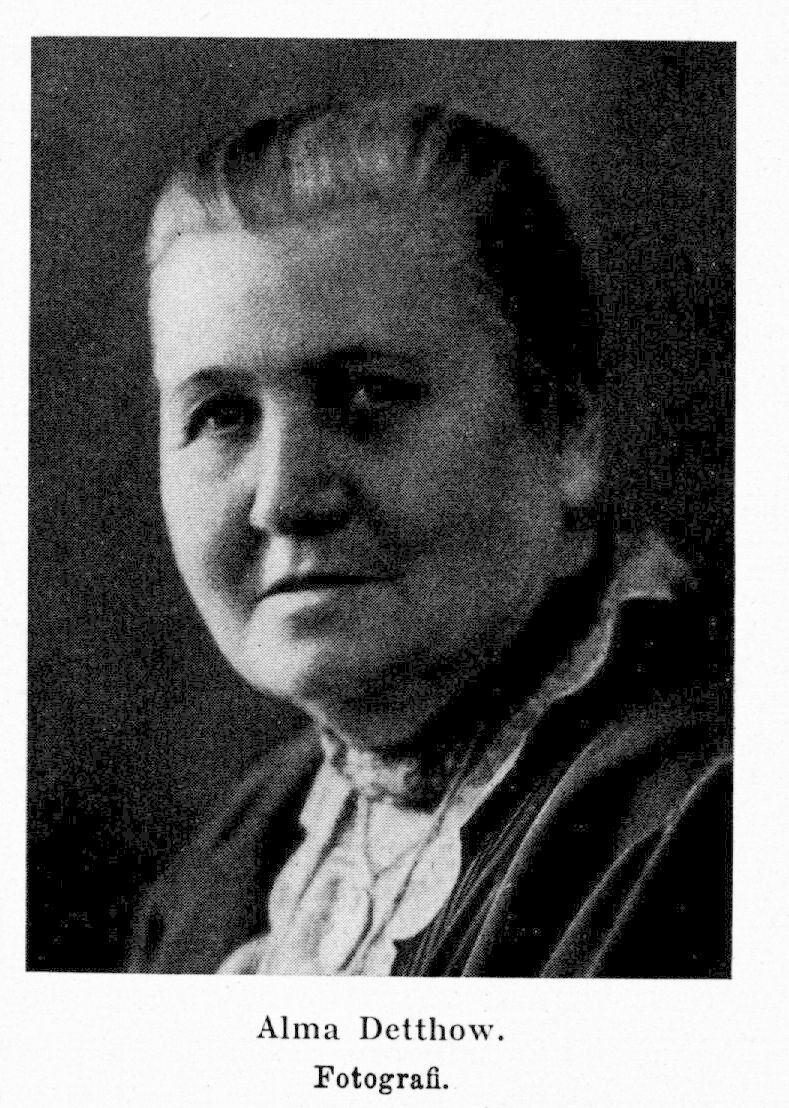