Alexandra Skoglund was the first chair of the right-wing General Electoral League’s central women’s council. The issues of core importance to her were women’s suffrage and improved career-training options for girls.

Alexandra Skoglund was born into the Klara congregation of Stockholm in 1862. Her mother was named Lovisa Sofia Gottshialk and belonged to a well-to-do Stockholm family. Her father, Daniel Carl Alexander Skoglund, was 25 years her mother’s senior and ran a saddler’s business. Her family also included her brother, Carl Erik Johan, who was two years her junior.

Alexandra Skoglund really enjoyed studying and wanted to carry on with further academic studies but at that time the options for women were very limited. Her father was not enthusiastic about his only daughter devoting herself to the academic domain. Teaching jobs were open to women, however, and Alexandra Skoglund felt that choosing a teaching career would allow her to continue studying. She attended Högre lärarinneseminariet (the advanced female teacher-training programme) in Stockholm, from which she graduated in 1882. Although she wanted to carry on at university level this proved difficult as there were no general schools open to girls. In order to be considered for higher education she had to study subject after subject at home and she eventually gained her school-leaving certificate as a private student in 1883. Then she was able to enrol at Uppsala university, albeit her student life was limited due to the fact that she was a woman. When Alexandra Skoglund and her friend Anna Ahlström were not allowed to join the advanced students’ society Heimdal purely due to their sex they joined the Uppsala women’s students’ society led by Lydia Wahlström. Academically qualified women had neither the right to join academic societies nor the opportunity to work within the university. Everything was exclusively restricted to men and Alexandra Skoglund protested against this. She continued her studies at Uppsala university and gained her PhD in history in 1903 having defended her thesis entitled De yngre Axelssönernas förbindelser med Sverige 1441–1487. That same year she became employed as a teacher at Nya elementarskolan för flickor (girl's school) in Stockholm. She remained in post until she retired in 1933.

Throughout her working life Alexandra Skoglund remained active in various organisations which dealt with women’s issues. She was the secretary of Sveriges Kvinnors Nationalförbund (national association of Swedish women), she was active in Fredrika-Bremer-Förbundet (association) and attended international conferences. She was also a member of Landsföreningen för kvinnans politiska rösträtt (national association for women’s suffrage), Sveriges moderata kvinnoförbund (women’s association of the Swedish moderate party), and Allmänna valmansförbundet (AVF; the General Electoral League), as well as Allmänna valmansförbundets centrala kvinnoråd (the General Electoral League’s women’s council). AVF had long opposed the admission of female members, however, following the Swedish parliament’s decision in 1919 to introduce general suffrage for men and women in national elections and the party’s need for votes from women they were allowed to join the association. This then allowed for the establishment of women’s clubs and centrala kvinnorådet (CK) in particular. Alexandra Skoglund became the latter’s first chair, entailing her departure from Moderata kvinnoförbundet.

In 1921, following that year’s election, Alexandra Skoglund was able to convince the party to publish a special women’s issue of their journal, Medborgaren. In 1925 the CK was given a special column in the Kvinnoröster journal. Here all the women’s associations and party branches across Sweden could write about enterprises, current policies, interviews, and reports from conferences. CK was given financial subsidies from the party meaning that more members were recruited. High up on the agenda was career-training opportunities for women. Alexandra Skoglund was one of the women who, in 1931, set up Högerns kvinnliga medborgarskola (the right-wing party’s female civic school). CK began to offer courses nationwide to disseminate ideas and knowledge. Alexandra Skoglund believed “that the women who wanted to be active in public work should gain qualifications here to both theoretically and practically equip them well.”

In 1937 Moderata kvinnoförbundet merged with CK and Alexandra Skoglund was re-elected as chair. At that point she was 75 years old but, as the election committee had not been able to find anyone else she was re-elected for yet another year. However, the following year she died from a lung infection. As thanks for her many years’ political contributions to the organisation AVF covered the cost of her burial. She was buried at the Norra cemetery. 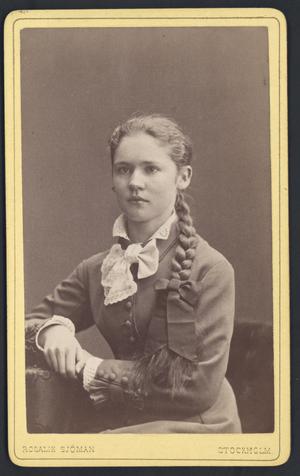