Aina Rietz served as a nurse in the Red Cross during the Balkan wars in 1912—1913, and in Persia in 1932—1934. For her contributions she was decorated with several medals and had a road named after her, Syster Ainas Gata on Guldheden in Gothenburg.

Aina Rietz was born in Gothenburg in 1885. Her father, Johan Albert Rietz, was a captain in the merchant navy and sailed all over the world. Her mother, Torborg Ahrenberg, came from a well-known wealthy family in Gothenburg. Aina Rietz had an older brother, Ture Rietz, who moved to the USA as an adult. Aina Rietz herself had her base in Gothenburg, but she undertook many journeys abroad.

Aina Rietz attended upper secondary school at the Majorna grammar school for girls in Gothenburg and after that she trained as a nurse at the Sophiahemmet nursing school in Stockholm. Her first nursing appointments were Vänersborg and then in Halmstad, where she worked at the regiment as a ward sister. In 1921 she moved to the Sahlgrenska hospital in Gothenburg and worked there until her retirement in 1942, the last years as an almoner.

Aina Rietz had dreamt early on about doing something great and self-sacrificing. This ambition she more than fulfilled. In 1912 she travelled with a Red Cross ambulance to Belgrade, where she was stationed together with other Swedish nurses and doctors during the first Balkan war. She was a trained surgical nurse and her assignment was to look after the wounded. These arrived by night at a temporary war hospital, accommodated in a school. On certain nights, 200 wounded might arrive, and that involved a hurried sorting out of which soldiers could be saved. Early the next morning, the operations began. The local doctors and nurses were considered too ignorant and unskilled in anaesthesia, surgery and hygiene. They were immediately discharged and replaced by Swedish nurses and doctors. The first Balkan war ended in May 1913. The Swedes had by then already travelled home because of the lack of funding. This was a great disappointment for Aina Rietz, who wanted to complete their work. The Balkan countries were not satisfied with the peace agreement, and the second Balkan war broke out already in June 1913 and continued until October the same year. By order of the Red Cross, Aina Rietz travelled there once again together with six other nurses and two doctors, this time however by train and boat to Thessaloniki in Greece, where a military hospital had been opened in a private house. She worked there with a team of Swedish and Greek surgeons who received the wounded, after which, if possible, they were sent on to a bigger hospital in Athens. Aina Rietz accepted the offer to remain in Athens after the peace declaration and build up the surgical care, above all for nurses during the years 1916—1917.

The journey home to Sweden turned out to be very dramatic, since the first world war had broken out by then. The Swedes made their way to Italy and thereafter by boat on to Sweden. Italy and Germany had promised to sink all the vessels they met in the Mediterranean, but Aina Rietz wanted to try to get home anyway. There was great joy when she arrived home for Christmas, totally unharmed. After her arrival home, Aina Rietz worked as a ward sister in Gothenburg. She had a great interest in social enterprises and also wrote dietary prescriptions for which types of food would be suitable for which diagnoses.

In 1932, Aina Rietz was given the assignment together with Dr Gustav Möller to modernise and improve healthcare in Teheran, Persia (nowadays Iran). Among other things, Aina Rietz wanted to start a nurses’ training while she was working as a surgical nurse at the Shah’s hospital in Teheran.

The journey to Persia was by train to Istanbul, and thereafter bus through Syria, Palestine, Iraq and finally Persia. The journeys were adventurous: “we had two bus drivers and they changed places with each other while we were moving so as not to lose time”, wrote Aina Rietz in her letters. They had to stop several times and repair punctures. Teheran in the summer was frightfully hot, and Aina Rietz made the authorities give the Swedes a house in northern Teheran, up in the mountains where it was much cooler. Persia at that time was orientated towards the west and much of the work force came from Europe, to build up the infrastructure in society in the form of railways, healthcare and schools.

Aina Rietz was in Persia during the years 1932—1934 when she worked both as a surgical nurse and with the training of nurses. She found it however difficult to implement changes in Persia, on account of troublesome and unwieldy bureaucracy. When she was offered to stay on for a third year, she therefore declined the offer.

Once home, she continued working at the Sahlgrenska hospital. She was politically active, as a member of the right wing party, and she worked for various women’s issues. Her accomplishments in the Balkans as well as in Persia aroused great interest in the general public. She travelled all over the country giving lectures, and was awarded medals and prizes for her actions. In 1914 she received the Swedish Red Cross royal medal of merit in silver, and the same year the Serbian Red Cross medal of merit in bronze as well as the Serbian campaign service medal in gold. In 1915 she was awarded the Greek Red Cross medal of merit in silver and in 1934 the Persian medal of merit.

Aina Rietz was a humorous person as well as being strong-willed and strict. She liked working and her motto was: “I do not work out of duty but out of the love of people”. She also had a hospitable home, that with typical Gothenburg humour was jokingly called “The Rietz”. She had a large circle of friends, among others her cousin Elin Erlanson, a teacher and musician in Gothenburg, who shared her journeys through their wealth of correspondence.

Aina Rietz died suddenly on a train journey from Gothenburg to Halmstad on 8 December 1947, probably of a heart attack. She lies at rest in the Marieberg Cemetery in Gothenburg. 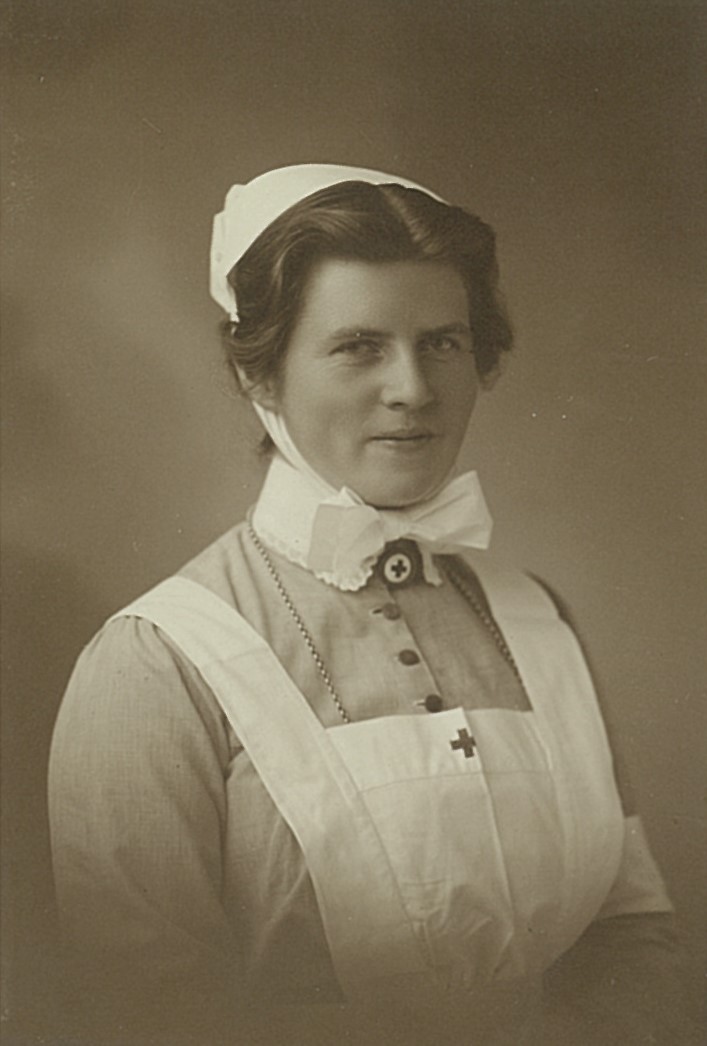