Aina Erlander was a teacher and served as chair of the children’s and youth organisation Unga Örnar from 1957–1966. She was married to the Swedish Prime Minister Tage Erlander.

Aina Erlander was born Aina Andersson in Lund in 1902. She grew up in Kvarnvik, near Lund, where her father was a manufacturer and mill owner. She did well at school and then went on to study mathematics and chemistry at Lund university, subjects which at the time were heavily male dominated. Her goal was to become a teacher.

Aina Erlander became friendly with fellow student Tage Erlander during her student years and through Lund mathematics society. The two of them began to work together in the chemistry department in 1923. Despite having gained her Master’s degree in natural sciences it proved difficult for Aina Erlander to get a job. However, in 1929 she was offered a position in Karlshamn. According to Tage Erlander’s memoirs, the couple married in 1930 although he claimed they were both opposed to the institution. They spent the early years of their marriage living apart, however, Aina Erlander in Karlshamn and Tage Erlander in Lund, and only saw each other during the holidays. Later Aina Erlander got a job at Malmö Borgarskola. Following Tage Erlander’s election victory into the second chamber of parliament and his subsequent appointment as Secretary of State the couple then moved to Stockholm. Initially they settled in Alvik and then they moved to Marieberg.

Aina Erlander was a committed Social Democratic party member, but avoided party obligations during her husband’s period as Prime Minister from 1946–1969. She protected her own career and integrity. She did, however, serve as chair of the workers’ movement children’s and youth organisation Unga Örnar from 1957–1966. This was a time when the organisation experienced a rapid increase in membership and by 1960 the membership numbered 30,000. Unga Örnar’s involvement in international matters as well as children’s and leisure policies increased during Aina Erlander’s time as chair. Unga Örnar, along with Hyresgästernas sparkasse och byggnadsförening (HSB) (tenants’ savings bank and building society) and Hyresgästernas Riksförbund (now Hyresgästföreningen, tenants’ association), ran the “Mera plats för oss” (we need more space) campaign which highlighted children’s need for appropriate leisure areas, amongst other issues.

Because Aina Erlander was married to Tage Erlander this gave rise to the idea that Unga Örnar was a Social Democratic party organisation, even though the statutes made it clear that the organisation was politically unaffiliated. Unga Örnar was thus criticised throughout the years for practising a form of political indoctrination, but Aina Erlander constantly defended the organisation’s ambitions, for example, as was quoted in Arbetet: “When we speak of the workers’ movement’s common values, democracy, equality, solidarity, collaboration, then we feel this is something that everyone should accept as a common perspective. Are these not the same values on which we are building society today? Who, then, would oppose that?”.

As a consequence of Tage Erlander’s lengthy stint as Prime Minister Aina Erlander was informally known for 23 years as “the first lady of the kingdom”. Indeed, during that period Aina Erlander met state and governmental heads from a large number of countries, in both formal and informal settings.

Upon retiring the Erlander couple spent much of their time in their holiday home at Bommersvik, near Stockholm. They had received the house as a gift from the Social Democratic party. With regard to the debate on nuclear energy Aina Erlander departed from her usually cautious stance in political issues. She expressed her support for “linje 2” (the cautiously pro-nuclear energy faction) whilst also accusing the supporters of “linje 3” (the anti-nuclear energy faction) of focusing on “irresponsible fearmongering”. She also helped her husband to write his memoires and after his death she began to work on collating his very detailed diaries.

Aina Erlander died in 1990, aged 87, at Tranås badhotell where she was receiving treatment for her asthma. She is buried beside her husband at Ransäter cemetery in Värmland. 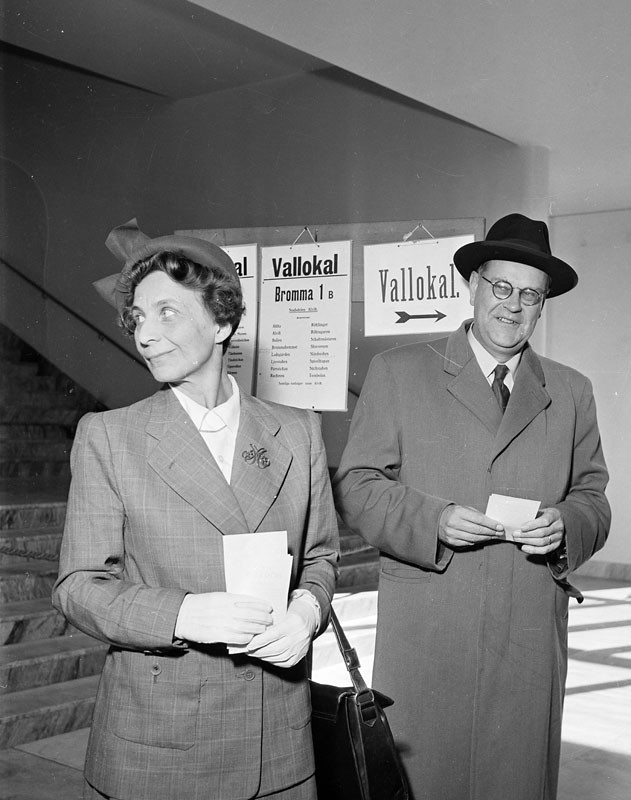