Aase Nordmo Løvberg was a Norwegian-born opera singer who worked at Kungliga Teatern (the royal theatre) in Stockholm for much of her working life.

Aase Nordmo Løvberg was born in Målselv, Troms. She was the daughter of Nils Nordmo, a farmer, and his wife Sigrid Charlotte Fossland. She began taking singing lessons in Tromsø with Hedvig Wulff-Ellingsen whilst also studying at Handelshögskolan (the college of economics) in the city. From 1941 onwards she continued her training in Oslo with Haldis Ingebjart Isene, who was a colleague of Gillis Bratt, a Swedish singing teacher and doctor. Opportunities to hold concerts were very limited during the war years and Aase Nordmo Løvberg’s first major performance thus occurred at a celebration at the Centralteater in Oslo in honour of Norway’s liberation and the return of King Haakon. Aase Nordmo Løvberg, upon receipt of the Ruud stipend, then continued her studies in Copenhagen with Ingeborg Steffensen at Det Kongelige Teater.

Aase Nordmo Løvberg made her formal debut as a singer in Oslo in 1948. Her first appearance as an opera singer occurred in 1952 when she sang the part of Imogen in an Oslo production of Arne Eggen’s opera Cymbelin. She signed up with Kungliga Teatern (the royal theatre) in Stockholm immediately after this, and she remained there for 18 years – from 1952–1970 – as a member of the permanent ensemble. Her debut performance in Stockholm was as Elisabeth in Wagner’s Tannhäuser.

In her day Aase Nordmo Løvberg was considered to be one of the leading representatives of her genre, known within the German repertoire as the “jugendlich-dramatisch” (lyric dramatic) genre (or as “lirico-spinto” in Italian). The term refers to a voice with a range and quality which lies between that of the lyrical soprano and the high dramatic soprano. Aase Nordmo Løvberg performed the majority of roles written for this particular specialisation, such as the Wagnerian roles of Elsa in Lohengrin, the aforenoted Elisabeth in Tannhäuser, Eva in Die Meistersinger von Nürnberg, Sieglinde in Die Walküre, Amelia in Un Ballo in Maschera, Elisabetta in Don Carlo, Leonora in Il Trovatore, Desdemona in Otello, and Aida in Verdi’s eponymous opera. She also sang the part of Leonore in Beethoven’s Fidelio and Die Marschallin in Strauss’s Rosenkavalier.

Aase Nordmo Løvberg's international breakthrough came in 1957 when Herbert von Karajan invited her to Vienna to sing the part of Sieglinde in Die Walküre. Her debut performance at the Metropolitan Opera in New York took place in 1959 where she sang the role of Elsa in Wagner’s Lohengrin. Her first appearance at the Wagner festival in Bayreuth occurred in 1960.

One of Aase Nordmo Løvberg’s significant roles during her time in Stockholm was that of Amelia in Verdi’s Un Ballo in Maschera, directed by Göran Gentele. The opera tells the story of the murder of King Gustav III in 1792. Due to the political situation in Italy during the mid-1800s Verdi was forced to transfer the location to Boston and the American colonies, as the censor viewed it as unsuitable to depict regicide on the stage. The opera finally premiered in Rome in 1859. During Set Svanholm’s time in charge of the Stockholm opera the story was returned to its rightful Swedish setting, in accordance with Verdi’s original intentions, and since then this has been the norm for productions, even when performed in other countries. Erik Lindegren was responsible for the stylish Swedish translation of the libretto and Sixten Ehrling directed the Kungliga hovkapellet (Swedish royal court orchestra). Aase Nordmo Løvberg also played Amelia when the production was recorded for Swedish TV in 1965.

Aase Nordmo Løvberg also performed frequently in her homeland whilst enjoying a successful career at Kungliga Teatern in Stockholm. She was also active as a church musician and in performances for the Norsk rikskringkasting (NRK). Following the establishment of Den Norske Opera & Ballett in 1957/8 she performed there as a visiting artist. In 1970 she brought her collaboration with Kungliga Teatern in Stockholm to a close and subsequently mainly worked as a singing instructor, initially at the Oslo conservatory of music. From 1973 onwards she worked at the Norges musikkhøgskole (NMH), where she also became the first professor of singing in Norway. She took a sabbatical from 1978–1981 during which time she served as the head of Den Norske Opera & Ballett, and then returned to the NMH, where she continued to teach until 1990.

Aase Nordmo Løvberg received a number of awards throughout her career, including the order of Sankt Olav, through which she became “Ridder av 1. Klasse” in 1957, and “Kommandør” in 1981. She was also awarded the Swedish Order of the Polar Star. 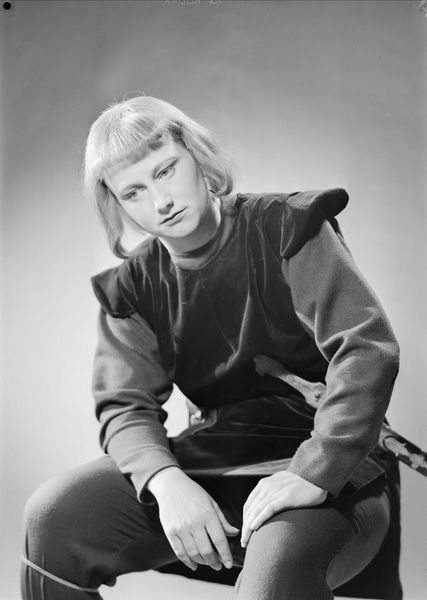